It's been a rough couple of months, hasn't it?  From the barrage of negativity surrounding our election through the horrific tragedy at Sandy Hook Elementary School this past weekend it's been non-stop.  Emotionally, I am worn out.  I still can't fully articulate how I felt this weekend.  It was one thing on top of another.  First, "watching" through endless breaking news updates the events of the school shooting in Connecticut.  Then, to compound that we hear of the twenty-two children who, at the same time as the Sandy Hook massacre was going on, were stabbed by a knife-wielding mad man in central China.  Next, an Oklahoma boy was arrested after trying to bomb his school.  Finally, a northern Indiana man was arrested and 47 guns were seized at his home after threatening to set his cafeteria worker wife on fire at her school and "take out as many other people as he could before the police could stop him."  I just don't understand what is going on in our world.  How did we get here?

Short of holing up in my room and not coming out until after the new year what is the solution?  Here are a few ideas:

Turn off the news- the media is all about reporting the bad news so turn them off.  Turn off your tv, your talk radio, your smartphone alerts and give yourself a news break.

Don't get drawn into the debates.  It's hard, I know but it can be done.  We all know it devolves all too quickly these days so avoiding it all together is the key.  Just don't even look at the comments.

If you don't want to take a social media break (and I don't-lol) hide or remove those people in your life who are the complainers.

Spread kindness- I am sure that you are always nice, so be extra nice to everyone that you see is having a rough day.  That cashier who just got chewed out over something out of their control, that mom who has a child throwing a tantrum, that waiter/ess who is running around like mad will appreciate that kind word and smile more than you realize.

And with that, I leave you with my favorite "words of wisdom" for the holiday season: 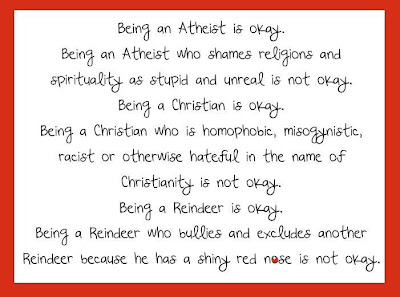 You hit it right on the 'red' button.
Great list.

I'm right with you, Jules. Seems like we have enough sad and troubling things going on in the world without being nasty to each other, too. I stopped watching the Sandy Hook wall-to-wall news at about the 48-hour mark (at least except during the local news, which was unavoidable and plenty, anyway)even though I was as shocked and sad as anyone else. It quickly became ghoulish, and as a professional journalist myself, it made me ashamed of some of my high-profile colleagues.

It's the time of year when the world, religious or not, at least thinks about togetherness, family, kindness and peace. I'm all for it, and in my own little world, I do all I can to pass those hopes on. And like you, I try to hang on with and pass them on during the rest of the year.

Here's a happy thought: It's Dec. 21--Solstice!--and the so-called End of the World according to the misread Mayan calendar and hey! We're still here! I don't know about you, but I'm gonna listen to Jingle Bells and do some laughing today!

Here's wishing you and your family and friends a lovely holiday. May you be filled with warmth, comfort and love.

Rightly said. You should be proud of yurself for maintaining this blog and spreading kindness around. Keep the good work,